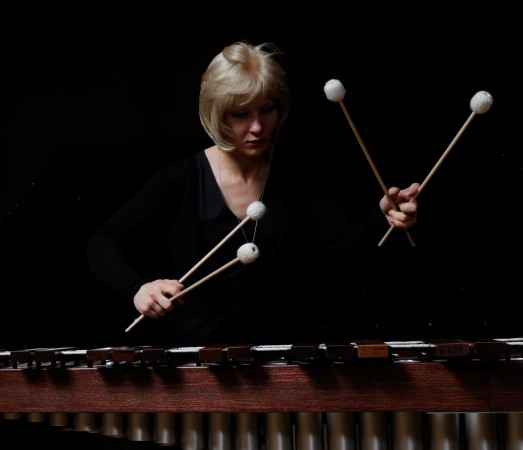 It was her outstanding musical qualities which led the jury of the ARD contest in Munich to honour Marta Klimasara with the first prize in the percussions discipline in the autumn of 2001. The Polish musician, who also won the – all time first – prize of the public this year, is endowed not only with winning charm and personality but also with great artistic sensitivity and polyvalence: she masters the soft, sometimes even intimate sound of the marimba with as much assurance as all the other challenges of the manifold percussion instrumentary with its almost endless arrangement possibilities.

It was by no means clear from the beginning that Marta Klimasara would become a percussionist: a piano student in her home town of Sosnowiec, she took up percussions at the age of twelve and was rewarded, four years later and whilst studying under Krzystof Jaguszewski, with several national prizes; she soon started on a solo career with the Silesian Philharmony in Kattowitz. To pursue her studies under professor Klaus Treßelt at the Staatliche Hochschule für Musik und Darstellende Kunst in Stuttgart she moved to Germany in 1994 and has since been living in the capital of Baden-Württemberg. In 2004 she became professor at the Hochschule für Musik und Darstellende Kunst Stuttgart.

Today Marta Klimasara is a highly acknowledged percussionist, famed also outside the borders of her new home; her international renown rests not only on her tournées in France, Sweden, Japan and South Africa but also on her many successes in international contests. Before winning the ARD contest – one of the most famed competitions in its field – she had already been awarded the first prize in the »2nd World Marimba Competition« in Japan in 1999 as well as the second prize in the »3rd Krzystof Penderecki International Competition of Contemporary Music« in Krakow. The young artist holds scholarships from the Yamaha Music Foundation of Europe and the Kunststiftung Baden-Württemberg and was commended by the European Cultural Foundation in Strasburg for her outstanding musical and artistic personality.

Marta Klimasara takes part in concerts with orchestras such as RSO Stuttgart, Munich Chamber Orchestra, Stuttgart Chamber Orchestra, National Philharmony Warsaw, National Polish Radio Symphony Orchestra and the RSO Saarbrücken and is a guest on many international festivals in cities including Vienna, Paris, Warsaw and St. Petersburg. She also produces radio and television recordings with the Bavarian and Hessian radio institutions, with the SWR, France Musique, SR 2 KulturRadio and Deutschlandradio.