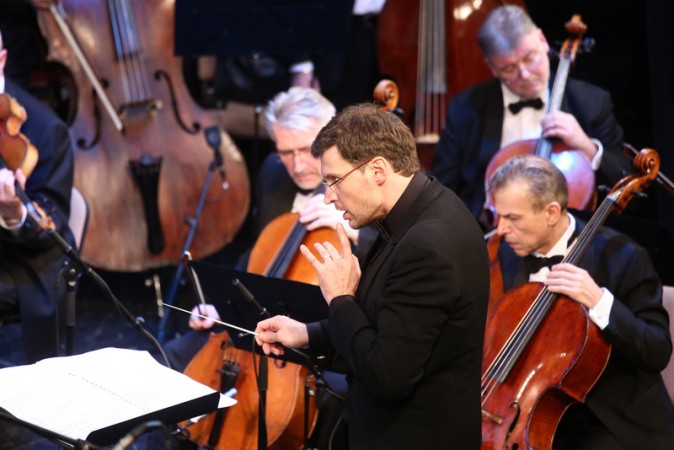 Modestas Pitrėnas is one of the most accomplished and well-known young Lithuanian conductors. He studied choral, opera and orchestral conducting at the Lithuanian Academy of Music and Theatre under Prof. Lionginas Abarius and Prof. Juozas Domarkas. In 1995–6 he pursued his conducting studies at the famous Salzburg school of music and visual artsMozarteum with Professors Walter Hagen-Groll and Karl Kamper. Later he participated in seminars and master courses held by famous conductors Esa-Pekka Salonen, Jorma Panula, Helmuth Rilling and others.

Despite his young age, Modestas Pitrėnas has a considerable working experience with various music groups. At the age of sixteen, he founded the Psalmos Choir. Under his artistic leadership the choir went on several tours in Europe and the US, and won prizes at many international choral competitions and festivals. The conductor himself won several highest distinctions at the international choral conducting competitions: in 2003 he won the 1st prize and gold medal at the 7th Grzegorz Fitelberg Conducting Competition in Poland, which provided him with the possibility to appear as a guest conductor with the leading Polish orchestras.

In recent years Modestas Pitrėnas focuses especially on cooperation with the Lithuanian National Symphony Orchestra, with which he has prepared the critically acclaimed programmes including large compositions by Witold Lutosławski, Ludwig van Beethoven, Robert Schumann, Gustav Mahler and Claude Debussy, which led to his appointment as Assistant Conductor in 2004. The conductor has also prepared many concerts together with the Lithuanian State, the Lithuania Minor, the Lithuanian Academy of Music and Theatre symphony orchestras and the Lithuanian Chamber Orchestra. Since 2000 Modestas Pitrėnas has conducted performances of Georges Bizet’s Carmen and Kurt Weill’s The Threepeny Opera at the Klaipėda Music Theatre, and collaborated with the Youth Orchestra of the Land of Nordrhein-Westfalen.